Note: When you have a kid that doesn’t sleep, sleep is something to document.  So we have a bunch of sleep pictures of R.  This post will contain some of my favorites.  Enjoy. 🙂

It’s 3am.  R is giggling and bouncing on his knees on the bed.  He pauses, throws his head back, gazes open mouthed upwards to something my eyes don’t discern, then laughs and resumes bouncing on his knees.  He has been awake since 11:30pm, after having slept just three and a half hours.  He will stay awake the rest of the night, and is still awake at the time of my writing this, 9am the next morning.  This despite taking enough prescription sleeping medication to “knock out a typically developing three year old for two days straight,” as R’s rather humorous but blunt sleep specialist put it.

When we first began to see sleep difficulty with R, his Developmental Pediatrician at the autism clinic where he is followed told us that Autistic brains appear to simply not require as much sleep as neurotypical ones.  But even given that reduced requirement, around his 2nd birthday, R began sleeping drastically less than is safe or healthy for a young child.

It started innocently enough.  A bedtime that crept gradually later and later, lulling us with a sense of normalcy.  Until one day it occurred to me that he was going to bed no earlier than midnight, and that we didn’t know any other children that slept that late and had already dropped their naps as he had!  Then came the night waking.  He would wake in the middle of the night full of energy as if it were morning.  He would play for a while, and eventually fall back asleep.  When we first began to have concerns about his sleep, he was getting a total of about 9 broken hours per night.  At his age at the time, it was recommended that children sleep at least 12 hours.  We shared our concerns with his DP, who gave us the tidbit about Autistic brains, and advised trying Melatonin, an over-the-counter sleep aid that helps with falling asleep, but she was not overly concerned.  From where I sit now, I can see why.  I would LOVE to see R get 9 hours a night at this point. 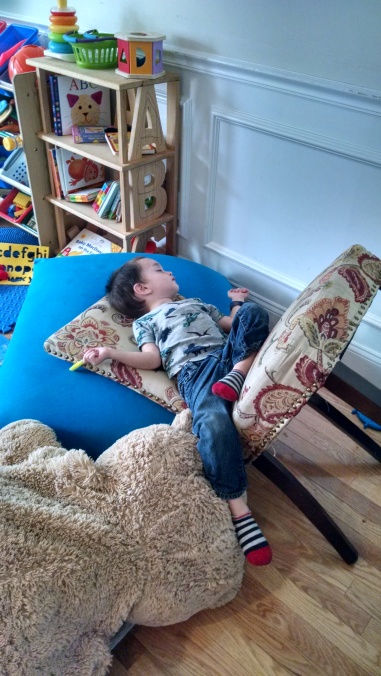 We did begin Melatonin, which helped with the length of time it took him to fall asleep, but it didn’t help him stay asleep.  As time passed, his sleep grew progressively worse.  He was sleeping from midnight to 2am, then staying awake from 2-6am, then sleeping 6-8am.  He was getting a total of 4-5 broken hours of sleep, and still not napping during the day.   He was two, and supposed to be getting 11-14 hours of sleep per 24 hour period.  After a few months of this his DP agreed that he needed medication for sleep.  We were referred to a sleep specialist and R was started on Clonidine, a blood pressure medication used off label to treat ADHD and sleep disorders in children.

At first, Clonidine was amazing.  He was sleeping about 9 hours per night while on it, about double what he would get off of it.  We also found that it reduced some of his compulsive sensory seeking.  Prior to Clonidine, R had a compulsive need to run constantly.  He would run circuits around our block, over and over, throughout the day.  One day we decided to calculate his mileage, and discovered that at 2 years old, he was running more than 2 miles every day!  After starting Clonidine this reduced dramatically, down to 1/4 mile or less per day.  Yet his mood and energy level remained high.  He was not tired or slowed down, he just didn’t need to compulsively run anymore.

About a month after starting Clonidine, his sleep began to decline again.  The doctor upped his dose.  Two months later it began to decline again, and his dose was increased again.  This would go on to happen 3 more times over the next year.  Now at age 3, his dose is about 8x higher than it was when we started Clonidine (he was started on 1/4 of a tablet, and now takes 1.5 to 2 tablets per night).  During his most recent sleep regression, about 2 months ago, the doctor not only increased his Clonidine dosage to what he takes now, but also added a prescription for Trazodone.  With his Melatonin, Clonidine, and Trazodone, we were administering 5 pills total each night…to a 3 year old.  Have you ever tried getting a 3 year old to take PILLS, not liquid medicine, but actual pills?  Now imagine that he has special needs, cannot understand what is said to him, and due to his feeding disorder cannot tolerate any of the things usually used to disguise medication for children (applesauce, chocolate pudding, chocolate milk, juice, etc).  It is no easy task.. 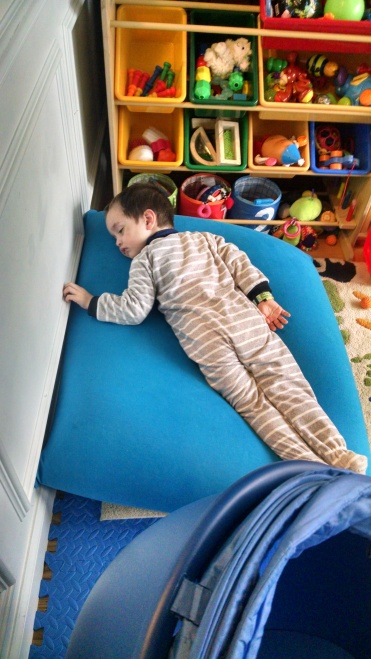 Trazodone did not go well for R.  We would find that it worked great for about 3 days, and then seemed to accumulate in his system to where by day 4 we were starting to see moodiness and exhaustion during the day, like a hangover.  Days 5 and 6 would be absolutely miserable.  By day 7 my husband and I would both agree we just couldn’t give it to him that night.  So then he wouldn’t sleep well because he wasn’t getting the additional medication, but at least he was happy.  For a while we tried cycling the Trazodone- 3 days on, 3 days off.  But that had inconsistent results.  We finally decided it wasn’t worth whatever extra sleep he was getting and stopped giving it to him.  Sleep isn’t perfect right now, he has his all-nighters like last night, but he also has several good nights per week, and for now this is what’s working best for him.

Ahh sleep.. Beautiful, elusive, sleep.  One day we will catch you. 🙂